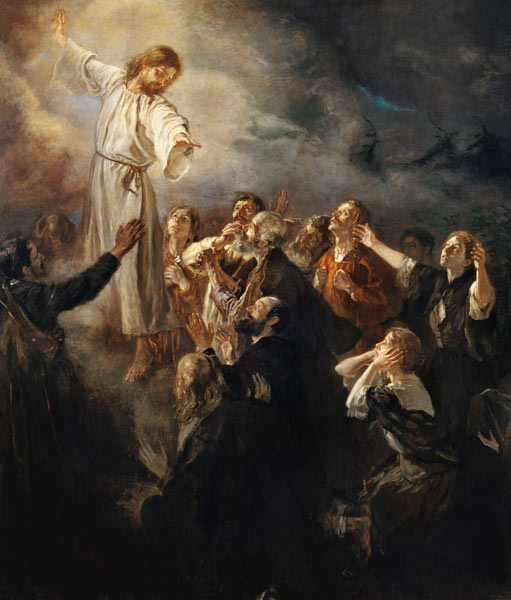 And he led them out as far as to Bethany, and he lifted up his hands, and blessed them. And it came to pass, while he blessed them, he was parted from them, and carried up into heaven. And they worshipped him, and returned to Jerusalem with great joy: and were continually in the temple, praising and blessing God. Amen.

Father William Martin was born in Boston and attended Tufts University, earning a BA in Political Science. Thereafter he attended King's College Halifax, N.S., and completed the one-year Foundation Year Programme. Following this he earned his MA in Classics/Medieveal Theology. He supplemented his study with further Divinity study at St. Stephen's House, Oxford, U.K., before traveling to Nassau of the West Indies to be ordained Deacon and Priest  by Archbishop Drexel Gomez of the Anglican Province of the West Indies, where he served in the late 1990's. Thereafter, Father Martin served at St. John's Church, Delmonte, CA. Following this, Father Martin served at All Saints Church, Mills River, NC, Father Martin was appointed as Rector of St. Michael and All Angels, Arden, NC in January, 2013. Father Martin is also Dean of Logos House of Theological Studies. He also teaches as a member of faculty at St. Andrews Academy, Lake Almanor, California.
​

What We Believe - Our Profession of Faith 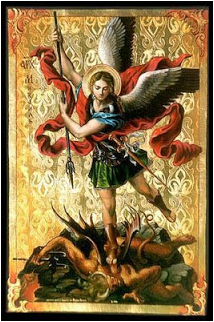 I believe in one God the Father Almighty, Maker of heaven and earth, And of all things visible and invisible: And in one Lord Jesus Christ, the only-begotten Son of God, Begotten of His Father before all worlds, God of God, Light of Light,Very God of very God, Begotten, not made, Being of one substance with the Father, By whom all things were made: Who for us men, and for our salvation came down from heaven, And was incarnate by the Holy Ghost of the Virgin Mary, And was made man,
And was crucified also for us under Pontius Pilate; He suffered and was buried: And the third day He rose again according to the Scriptures: And ascended into heaven, And sitteth on the right hand of the Father: And He shall come again with glory to judge both the quick and the dead; Whose kingdom shall have no end.
And I believe in the Holy Ghost, The Lord, and Giver of Life, Who proceedeth from the Father and the Son; Who with the Father and the Son together is worshipped and glorified; Who spake by the Prophets: And I believe one Catholic and Apostolic Church: I acknowledge one Baptism for the remission of sins: And I look for the Resurrection of the dead: And the life of the world to come. Amen.﻿

﻿History and FAQs about the Anglican Church:﻿

We are a body of Christian believers belonging to the Anglican Continuum.
Our congregation was Founded in January of 2013 and is currently based in the Hendersonville/Asheville, NC area.

What is an “Anglican”?

An Anglican is a Reformed Catholic Christian – one who holds to the Evangelical Faith and Catholic Order of the Church as received and traditioned through the Church of England, her Common Prayer tradition, her Thirty-Nine Articles of Religion, and her historic Formularies.

So you are Evangelical

Yes, in the full and literal sense of that word:  We proclaim the whole Gospel as prophesied in the Old Testament and fulfilled in the New, as the Good News of God's merciful salvation and redemption through Jesus Christ our Lord.  We believe that Jesus Christ is not only the everlastingly-begotten Word or Logos of God the Father but also his Desire and Will made flesh and only effectual activity bringing to death the old man and bringing to life the new.

And  you are Catholic, too?

Yes, in the ancient, full and literal sense of that word:  we are Catholic; we  believe whqt was accepted  everywhere [ubique], always [semper], and by all [ab omnibus]. By this triple norm of diffusion, endurance, and universality a Christian can distinguish religious truth from error. We accept the truth as defined and explicated up until and including the Fourth Ecumenical Council. We repent for any role we have played in the dismemberment of Christ's Body. We repent for any complicity in a culture of idolatry and idiolatry such that we have failed to reveal, disclose, and impart the Wisdom, Power, and Love of God the Father that Jesus Christ is and desires to actualize in us through Our Lord the Holy Ghost, as the only Way, Truth, and Life that save man.

Are you an episcopal Church?

Yes, because we embrace the unbroken chain of Apostolic Succession extending from the Latin Church through the Church of England to us. An episcopal church with valid orders is one which retains this Tradition and respects that Ordination to the Episcopate, Priesthood, and Diaconate are vocations and callings for males alone. The vocation and calling to the Setting Aside of Deaconesses is essential also to our ministry. Our Lady-Deaconesses are essential to the Ministry of Men. Our Deaconesses provide a special ministry to women in the church. They provide us with a living testimonial to the Mission and Vocation of the Blessed Virgin Mary, Mother of God, and "the key, whose 'Yes to God's Word' initiates our Redemption and Recapitulation of Human Nature to God." The callings of Widows and Virgins are also essential to the balanced contributions made by both women and men. Both Male and Female in Christ are necessary to the full life of Christ and His Body, the Church.

What is a “diocese”?

A diocese is a regional group of local churches under the pastoral care of a bishop.  It is governed by a Synod made up of the bishop, clergy, and lay representatives elected from the congregations.

We believe that God – the Father, the Son, and the Holy Spirit – the Creator and Preserver of all things, has called all men to communion with Himself. Through the union of the Father's Everlastingly-Begotten Word or Son, Jesus Christ, by the operation of the Holy Spirit, with human flesh taken from the Blessed Virgin Mary, we are Redeemed and Saved, God has fulfilled His promise to save sinful men. Through His Word's Holy Incarnation, Suffering, Crucifixion, Resurrection, and Ascension, He has returned and reconciled all men to Himself. Through the expansion of his Mystical Body from Heaven by the spiritual action of the Holy Ghost, He awaits one thing: man's decision or choice to become a part of His Life through Grace. Man can begin to will the pure and perfect Good through participation in the Body of Christ, by the certain Indwelling of our Lord the Holy Ghost. "It seems good to us and to the Holy Ghost" that we spends our mortal days living in and through God the Holy Trinity.

HOLY Scriptures containeth all things necessary to salvation: so that whatsoever is not read therein, nor may be proved thereby, is not to be required of any man, that it should be believed as an article of the faith, or be thought requisite or necessary to salvation. In the name of Holy Scripture, we do understand those Canonical books of the Old and New testament, of whose authority was never any doubt in the Church. (Article VI, BCP 1662)

The visible Church of Christ is a congregation of faithful men, in the which the pure word of God is preached and the sacraments be duly ministered according to Christ's ordinance in all those things that of necessity are requisite to the same. As the Church of Jerusalem, Alexandria, and Antioch have erred: so also the Church of Rome [and the Church of England] have erred, not only in their living and manner of ceremonies, but also in matters of faith. The Church is the steward and guardian of the Holy Scriptures and Holy Tradition.  It is the Mystical Body of Christ -a school for saints and a hospital for sinners. (Edited Article XIX, BCP 1662)

Sacraments ordained of Christ be not only badges or tokens of Christian men's profession, but rather they be certain sure witnesses and effectual signs of Grace and God's good will towards us, by the which He doth work invisibly in us, and doth not only quicken, but also strengthen and confirm, our faith in Him.
There are two Sacraments ordained of Christ our Lord in the Gospel, that is to say, Baptism and the Supper of the Lord. (Article XXV) We believe that God has chosen to act through the visible and tangible creation, through what we can see, feel, taste, touch, and smell, to transform and transfigure our interior and spiritual natures. In Baptism the stain of Original Sin is wiped away. In the Eucharist Christ offers His Real Presence to us as broken bread and poured out wine, broken Body and poured out Blood, the food of men wayfaring, the sustenance of God's wisdom, power, and love, without which we cannot be saved.

We believe that by God’s express design Holy Matrimony is to be a lifelong sacramental union of one biological male and biological female  ordained by Almighty God: 1. For the procreation of children; 2. As a remedy against sin; and, 3. For the mutual society, help, and comfort, that the one ought to have of the other, both in prosperity and adversity.   We believe that both married and single persons are called to chastity, which means exclusive sexual and spiritual fidelity to one’s spouse in Holy Matrimony or exclusive spiritual fidelity to God through holy abstinence in the single state of celibacy.

… about the sanctity of human life

This congregation believes that human life, from conception until natural death, is a precious gift from God, not to be treated disrespectfully, dishonorably, or negligently. Each person begins his journey at conception as a unique human being destined to discover, cultivate, and grow the Image and Likeness of God in his life. Each human being is a unity of body, soul, and spirit, whose vocation or  calling is to serve, obey, and love God, and to love his neighbor as himself. Human life is sacred because it comes from God and is made to return to God, through Jesus Christ, and by the Holy Spirit.


Now, about your Worship…

Why do you use that old Prayer Book?

Because it articulates and applies the Reformed-Catholic theology of the Church of England to the human soul and community in pilgrimage home to Heaven's God.  The classic Anglican Common Prayer tradition is unparalleled in its truth, beauty, and holiness. Its poetry and theology combine to carry the believer through repentance to amendment of life, from amendment of life into the beauty of holiness and the persistent transfiguration of the human person in anticipation of the Resurrection of the Body at Christ's Second Coming.

May I receive Communion?

The discipline of our church requires that in order to receive this sacrament, a man  (1) must have been Baptized with water in the Name of the Father, and of the Son, and of the Holy Ghost, (2) must have been confirmed by a Bishop in the Apostolic Succession, or be ready and willing to be confirmed, and (3) must have repented of his sins, be in love and charity with his neighbors, and intent upon leading a new life in the Body of Christ.

When a person receives the Holy Communion, he publically professes to have met the above-mentioned requirements.  In other words, when he kneels before God’s Altar, he is confessing before God and His Church that he is a sinner in need of salvation, whose repentance marks a turn toward God to receive His all-effective Word which alone can lead him into newness of life.

What do you expect of your people?

We expect every member ...
If I want  to become a member, what do I need  to do?


Grace and peace be multiplied unto you through the knowledge of God, and of Jesus Christ our Lord.
(2 Peter i.2)